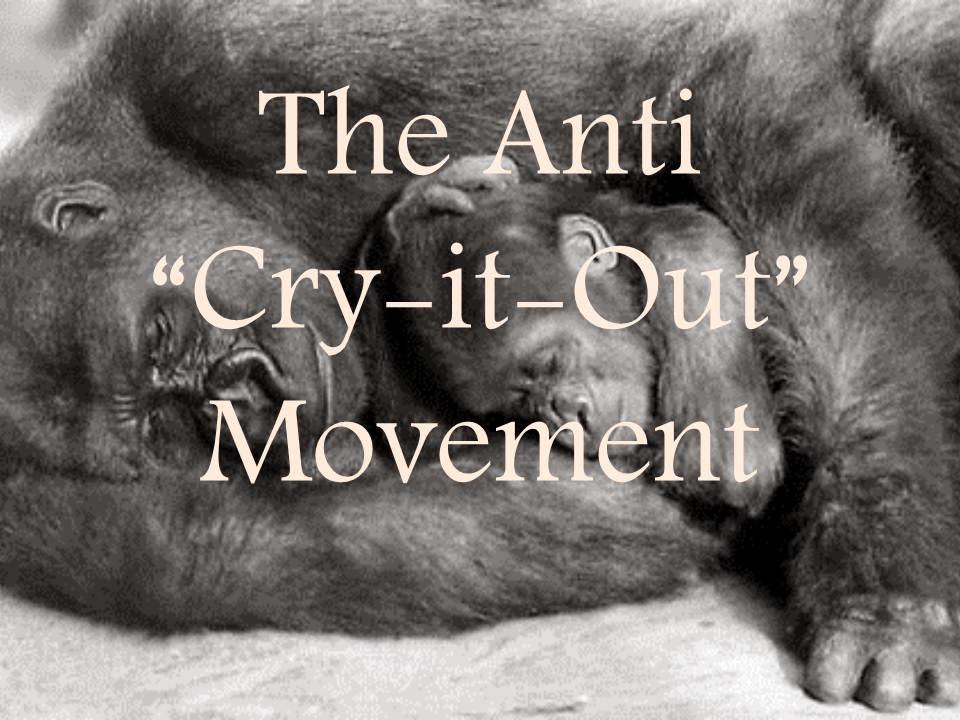 I have titled this post “The Anti “Cry it Out” Movement” because that is what I hope to achieve on some small level, someday.

The inspiration to start this blog all stemmed from one, short article that my sister in law shared on Facebook titled Screaming to sleep, Part One: The moral imperative to end ‘cry it out’ . To summarize, it is a devastating portrayal of what an infant goes through during the sleep-training method titled “cry it out” (CIO for short). I could not even get through the first paragraph before I felt a wave of nausea. I felt sympathy so strong, that I literally had a physical response.

This article continued to haunt me. I would be driving home and remember this article, and would feel sick to my stomach thinking of these babies. It was all I talked about to my husband when I would get home from work. I would bring it up in conversation whenever I could. Even today, I have to distract myself whenever this article pops in my head.

I know what some of you are thinking, this reaction is a bit extreme. Call it surging hormones, first-time mom syndrome, or hell to get really scientific maybe it all boils down to the empathetic portion of my brain being stimulated by a chemical reaction after childbirth (pause: mind-blown). Regardless of how or why, it set off a chain reaction. This one article affected me SO much that I feel a moral obligation to do something about it.

Hence, here I am typing away.

If I’m being honest here, before I became a mother, the phrase “Cry-it-out” was something that I heard of often, thought of as a milestone of child-rearing that you had to face when the time came. However, now that my daughter is here and a living breathing being, I cannot possibly fathom how this method has gained so much popularity. But then again I can, because in our culture the question that parents with new babies are asked most often is “is your baby sleeping through the night?”. So when did “sleeping through the night” become a thing? This is a great post on the history of when things changed. But the fact remains the same; a baby who is going through rapid brain development and growth who needs around the clock care and nourishment is not naturally programmed to sleep through the night. Although that I am secretly jealous of those moms with naturally good sleepers; they are the exception, not the rule.
Nicolle Wallace from The View said something that resonated with me…(paraphrasing here)

“Motherhood changes you, shatters your heart in a thousand pieces and it somehow gets put back together again, but it is never the same.”

This is how I feel about the topic of “CIO”, something I wouldn’t have thought twice about – until I became a mother.

This “sleep training” (even the word makes me shudder) method is a tactic to get infants (for the purpose of this post, age 0-12 months) to fall asleep and stay asleep on their own. To do something that goes against their carnal survival instincts. There is science to refute the benefits and science that spotlights the emotional and physical trauma caused by this method but it is still today a heavily recommended tactic by pediatricians (who are NOT Child Psychologists or in some cases, even parents) and the like. It’s not gently recommended either, it is put in flyers sent home with parents during well visits, there are hundreds of books available on the topic – you can even HIRE infant sleep-training “experts”!.

Now let’s think rationally about this for a moment…

Let’s go back…. way back… Thousands of years ago back…

Do you think our ancestors put their new, fragile, cherished offspring in another part of the cave (I know, I’m reaching here) once the sun went down and just left it there and ignored it’s cries?

While I cannot truly say for sure, my educated guess would leave me to believe: um NO. Like many primitive cultures around the world today, I can almost guarantee that the babies slept well protected next to their mothers (and fathers), nursing to sleep and then throughout the night.

Let’s take a look at some other mammals for example: Yup ALL sleep with their young.

A 6 week old infant has not yet mastered how to regulate it’s own breathing or body temperature yet but it is expected that they “learn to be independent” and to sleep not only away from their mother, but completely alone. My dog won’t even sleep alone!

I have done my research on the proposed “benefits” and not only do I not believe them, but they have been debunked by many professionals. Including published research explaining how an infant does not “learn to self soothe” at all, but in fact physically “shuts down” depicted by stress hormone (cortisol) levels remaining elevated throughout sleep. An infant is genetically predisposed to stay close to it’s mother. For safety, for protection, for warmth, for comfort, for nourishment, etc., etc. Infants who cannot yet walk, talk, feed themselves, keep themselves warm, are simply not capable of being “independent”. They are in every sense of the word dependent. It is to me the epitome of a contradiction. In my OWN PERSONAL opinion, it is not only unnatural, but (Warning: about to use a controversial word here) cruel, and a socially acceptable form of child neglect. I feel that all this will teach my child is, when you need me- I won’t be there. And they will eventually stop asking…(which in psychology is actually termed “learned helplessness” – and is exactly what is taught during sleep training tactics)

Putting the human infant instincts aside (who is born more premature and dependent on the mother than a vast majority of species), let’s look at our own instincts. There is a reason this method feels “wrong” and why mothers are stressed and emotional during the process…because it goes against everything that has been ingrained in us since the beginning of our evolution- what has kept our offspring alive.

Okay, okay so we are not “animals” per se … I get it. And we are far from the days of worrying about wolves snatching our babies, but we are still mammals and our innate instincts have not changed all that much.

Case in point: It is known that alone, sharing a room with your infant reduces the risk of SIDS by HALF- a whole 50%! And yet this statistic somehow seems to be ignored. On top of that statistic, research has shown that close proximity during sleep between a mother and her nursling facilitates irrepressible (ancient) neurologically-based infant responses to maternal smells, movements and touch altogether reducing infant crying while positively regulating infant breathing, body temperature, absorption of calories, stress hormone levels, immune status, and oxygenation as well as promotes successful breastfeeding (which has it’s own mountain of benefits).1  Enough said.

I do not want to demonize the parents who practice CIO nor do I think they are bad parents. I think once again, this is another example of a bad trend. Well-meaning parents following misguided advice backed by theoretical evidence (that is sometimes coming from their trusted pediatrician) and societal “norms”.

I hope by the time my daughter is having her own children, this trend is a thing of the past. As history has shown us, we are not always right (i.e. Slavery, Antisemitism). I would like there to be “Anti-CIO” pamphlets available in doctors offices. I would like pediatricians to stop offering this type of parenting advice. I want all of this and more. Frankly, because my heart cannot bear the thought of it continuing.

I do not want to end this post leaving a problem without a solution. As a former working mother, I am fully aware that in our modern day society, sleep is coveted and necessary. Personally, I believe in the benefits of co-sleeping (a term used to describe a child sleeping in either the same room as the mother/parents or in the same bed- I prefer the latter (if done safely)) and survive the interrupted sleep by never having to fully wake to nurse since we sleep in such close proximity. I also know that my child will eventually grow out of needing me at night, and that this is a temporary state that will pass as she grows more independent (which will be bittersweet). But to be honest- I enjoy sleeping with my baby! (And to your shock: My husband doesn’t mind either.) However, I am not so close-minded to think that bed-sharing is for everyone. And if you find that you would like to try a gentler approach to having your nights back, I highly recommend the book the no-cry sleep solution by Elizabeth Pantley.

If you are interested in the science perspective of why this trend has to go: Please read a good article here and the whole article referenced above here on the subject.

Also, please look for future posts debunking the myths and highlighting the benefits of bed-sharing/co-sleeping; but for now, you can find more information on co-sleeping here.

This site uses Akismet to reduce spam. Learn how your comment data is processed.

I am an unapologetically open, passionate Mom to two little girls. A Scientist by trade turned Stay At Home Mom. My only hope is to inspire and empower other mothers to follow their instincts and be confident in themselves. I encourage you to read with an open mind & heart and perhaps leave with a little enlightenment!